I had the honor of running a booth during a Jazz in July event here in Des Moines hosted by our neighborhood association and Metro Arts. The idea was to provide an activity for the children who might not otherwise be into old-timey big band jazz.

Some of you might recognize the template as being Slim, one of my Little Monsters. It was for this specific event that I made Slim, with the idea of having a very simple monster to color, and then build. The hardest part was cutting out all the templates the night before as I didn't think introducing a knife into the mix would be a very good idea.
So I "borrowed" all of my children's crayons, set up a table and waited for the little monster makers to arrive. Instead of glue, I decided the best route would be some double stick tape. Once a template was done, I helped them to roll it and tape it, flipped the feet up, and then added the arms. Voila! Monster making at its best. 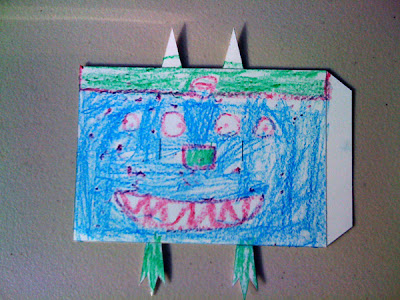 One of the cooler aspects of this project, was instructing the children that there was no wrong way to make a monster. Five eyes, one, upside down. Add slime, whatever. "Have fun." was the only rule. 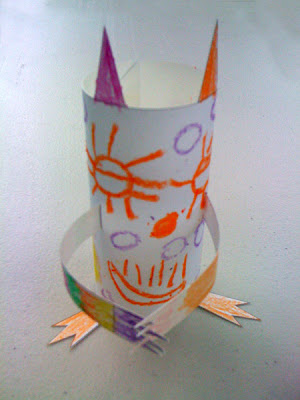 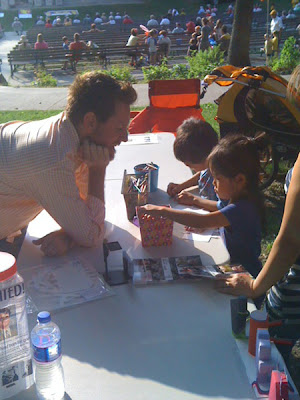 Another aspect I thoroughly enjoyed was watching the template transform from blank piece of paper to a finished monster, standing on its own. The transformation on the faces of the participants was pretty cool too!

Posted by baykiddead and the chicklet factory at 1:16 PM