i've been a big fan of the tour de france ever since 1989 and lemond's 50 second deficit. there have been some amazing moments in this most incredible competition, and i was lucky enough to bear witness to the most recent. 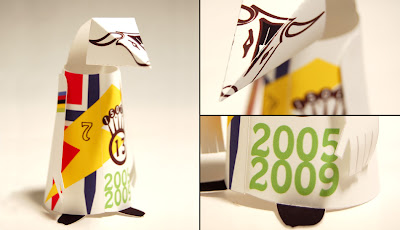 15th of july, 2011
stage 13
pau to lourdes. a distance of 152.5 km or 94.75 miles.
and oh yeah, a climb over the col d'aubisque, a "beyond category" climb.
this was the setting for what will most assuredly go down as one of the most thrilling and incomprehensible individual efforts in the history of the tour. perpetrated by a man they call the god of thunder, thor hushovd.
to fully understand his accomplishment, one has to understand his place in cycling. thor is a sprinter, specializing in hanging on in the peloton during the long flat stages with the goal of sprinting to the finish to win the day. thor, at his peak, was one of the fastest men on a bike, for 2 km. never a threat for the overall win, sprinters seek their glory in an all or nothing drag race.

stage 13 wasn't the kind of terrain a sprinter finds glory. not even in his wildest dreams.


so when thor broke out of the pack, everyone, and i mean everyone had to be wondering, what in the hell is he doing? well, what he was doing was going fast. no one in the peloton went with him, for what i assume was one of two reasons. first off, they couldn't, he was shot out of a cannon. secondly, "what was he doing?!?" they had to be thinking he'd come back to them.


but he didn't. he just kept going, how? i don't think thor even knows. with 23 k to go, there was still one rider ahead of him. jérémy roy had a 01:20 lead and more of a pedigree on these long grueling stages. but thor kept coming, and coming. at the 2.5 k mark, thor buried roy as if he was standing still. heartbreak for roy contrasted by utter joy etched on the face of the big norwegian. or maybe it was the same look of disbelief tattooed on everyone else's face.


it's not often we get to watch an athlete successfully re-invent themselves. jordan failed miserably at baseball. but watching thor do the impossible was a moment no one will ever forget.


so, to the stěny and what all that stuff means...
-the rainbow stripes on his arm designate that, for the current calendar year of cycling, thor is the uci road race champion, his jersey must carry these stripes.
-thor is from norway, hence the norwegian flag.
-in addition to the nickname, "the god of thunder", represented here by the bolt, another nickname thor carries is "the bull from grimstad" his place of birth.
-the "7" represents the number of days thor wore yellow as the leader of this year's tour. he is the first norwegian to wear the maillot jaune (yellow jersey.) the fact he even wore yellow, and for as long as he did, and what he did to remain in it on two different stages when all the experts pontificated that there'd be no way he maintain it, is in itself reason to honor his efforts in this year's tour.
-the crown with the 13 in it stands for the 13th stage, the jewels of the crown spell out the date of this stage.
-the green 2005 and 2009 stand for the 2 years thor won the green jersey competition for best sprinter in the tour.


so there you go... thor hushovd. this template is available in the downloads section.


one more note, this is part of series 3, which of course means that there's a series 2. i wanted to release this as soon as i could as i'll be out of town all next week and didn't want too much time to pass between thor's amazing feat. i'll try and put together another 11 tour inspired stěnys prior to leaving, but i'm not holding my breath.


the completed series #2 will be released when i return...
Posted by baykiddead and the chicklet factory at 1:40 AM