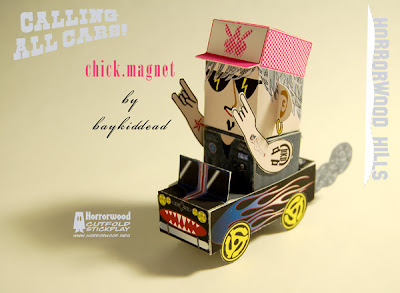 oh. yeah. chick.magnet.
the kind of guy that'll wear a "shocker" t-shirt to his niece's high school graduation. check his glove box, 10 bucks says there's a 8 track of journey's greatest hits next to a flashlight that doesn't work and a pen that's never written a complete sentence.
and you better bet your ass he knows all the words to "don't stop believing." just don't try and out air-guitar solo him. or invite him to your home.
don't ever do that.
chick.magnet. his idea of romance is olive garden and a girl on girl vid. he has the high score for ms. pac•man on no less than 14 consoles all over town. it had been 15, but chuck e. cheese won't allow him in the building. presumably for his continual rant of "i'd tap that..." during his playing of the game.
chick.magnet buys gas 5 dollars at a time, but never buys less than a 12 pack of pbr. the only art he's ever purchased required a black light. vacation is going to the hooters across state lines. chick.magnet owns all 8 collector versions of billy the singing bass, the entire star trek series on VHS, and each and every  1:43 scale, hot wheels NASCAR die-cast car from the 1998 season. chick.magnet has no retirement plan.
chick.magnet has no concept of politically correct. except when it comes to his mullet. chick.magnet takes offense to the term "mullet" he feels the correct verbiage for his preferred hair style is, "business in the front, party in the back." and that's exactly how he orders it at the barber shop.
CHICK.MAGNET
Posted by baykiddead and the chicklet factory at 3:58 AM