my take on paper 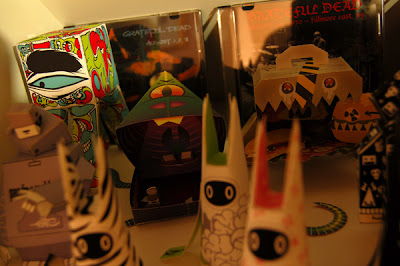 when the paper bug truly hit, and by hit, i mean mack truck impact, i was out of ink. so i did the next best thing which was scour the net looking for the designs and templates that blew me away. i found shin tanaka, boxpunx, horrorwood, castleforte, vin, and nani? bird. i ordered the amazing book, "papertoy monsters" from workman press and waitied for the mail. i looked for more templates. and waited for the mail.
when monsters arrived from amazon, i waited a full two days before i tore out my initial build, deciding instead to read every word, savoring the possibilities, choosing and then re-choosing which would be the first.
some glue and a few mistakes later, there it sat, on a shelf with the original three i had built for my daughter a few years prior. (i didn't get "it" back then, a shame too, think of all the shin's i could have collected.)
it was then that i understood that there are, for me, two very critical moments connected to folding paper. these are the joys that define the reasons i do it. the first moment is when the final touch is complete, the instant it becomes real. there it sits in your hand, finished, flawed, but a complete thing and not just a flat piece of pulp and ink. the second moment is when it's placed into the collection. a family grows by one and the whole becomes just a little bit greater than the sum of its parts.
after the joy of experiencing these two separate yet symbiotic moments a number of times, i thought back to when the mail hadn't come yet and realized that there was a third moment, just as, if not more important, than the other two. that moment is the joy of discovery. discovering a new designer, new template, new ideas and new possibilities. seeing something on your computer screen and channeling your inner seven year old voice to say, "i want that."
so thank you to those listed, and to dolly, marshall alexander, tougui, panda crew, jelly face, mistermanolo, marco zubak, phil, and 3 eyed bear for making the things that have me wanting. there are many more that inspire, and hopefully in the very near future i'll show you which ones they are.
Posted by baykiddead and the chicklet factory at 11:54 PM